High demand in the U.S., and low output from countries like Brazil, are leading to higher prices for roasting companies. THROOP, Pa. — Mary Tellie gets coffee beans from all over the world to make her specialty blends at Electric City Roasting Company in Lackawanna County. The price of that […]

High demand in the U.S., and low output from countries like Brazil, are leading to higher prices for roasting companies.

THROOP, Pa. — Mary Tellie gets coffee beans from all over the world to make her specialty blends at Electric City Roasting Company in Lackawanna County.

The price of that coffee is heating up, as growers in places like Brazil and Colombia deal with things like bad harvests and port delays.

“You have farmers that maybe were unable to pick the crop in time, but you also have logistics and supply chain, getting the coffee to port, and then once it’s at port, actually waiting for containers, because there’s a container shortage, to get that coffee shipped to the United States. And then once it’s in the United States, actually waiting for that coffee to be unloaded,” explained Tellie.

Electric City Roasting, which is based in Throop but supplies coffee to places all over the county, had its business completely upended when cafes and restaurants shut down last year.

Now that the world is beginning to wake up from the pandemic, people are going back to waking up with a cup of joe at their favorite cafe rather than at home.

“The request for product and goods and cold brew and coffee, of course, has increased, so that’s what we’re dealing with right now, which is a wonderful opportunity, but it does come with some concerns, and pricing is one of them,” said Tellie.

“Demand for coffee is at an all-time high. So, we figure the commodity’s going to increase, and we’ll just grapple with that like we grappled with everything else that we found on the supply side issue,” said Tom Bonin, owner of Commonwealth Coffee in downtown Scranton.

Bonin hasn’t seen an impact on his coffee prices yet. He says prices from his suppliers would have to go up “significantly” before he passed it on to his customers.

“Greater than 20 percent is something I’d probably pass on. We’re constantly evaluating our menu; we’re a start-up.”

Roasters and cafe owners say even if prices do go up for the consumer, it’ll likely be small enough that you won’t even notice.

Wed Jul 21 , 2021
© Provided by Xinhua A Syrian woman opens her hometown’s first vegetarian restaurant, which is welcomed by vegetarians as well as non-vegetarian eaters who are attracted partly by its cheaper prices, since many are struggling with their livelihoods amid the tough economic situation resulting from the U.S. sanctions on Syria. […] 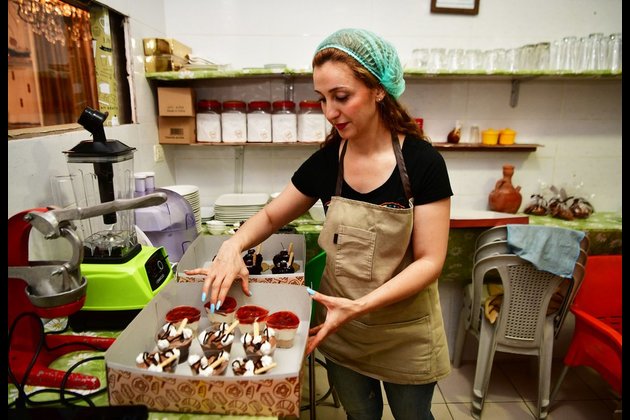