A government food labelling scheme designed to promote healthy eating among Hongkongers has a loophole: products tagged as low in one potentially unhealthy ingredient may be high in another one. At least 12 products labelled “low sugar” or “no sugar” under the voluntary “Salt/Sugar” Label Scheme for Prepackaged Food Products […]

A government food labelling scheme designed to promote healthy eating among Hongkongers has a loophole: products tagged as low in one potentially unhealthy ingredient may be high in another one.

After receiving inquiries from FactWire, the government removed over 30 per cent of the products under the scheme from its website with the consent of their manufacturers or distributors, adding that it plans to update the scheme’s specifications to avoid misunderstandings in the future. But some of the high-sugar or high-salt products labelled “low salt” or “low sugar” were still available for purchase at the time of writing.

FactWire’s investigation also found that over 70 per cent of the items that qualified for the scheme are produced by brands whose employees are also members of the Committee on Reduction of Salt and Sugar in Food (CRSS), one of the bodies in charge of the scheme, raising questions about the scheme’s legitimacy.

Food products that claim to be low in salt and sugar are often branded as healthier choices in supermarkets and health food stores. The “Salt/Sugar” Label Scheme for Prepackaged Food Products, jointly introduced in October 2017 by the Food and Health Bureau, the Centre for Food Safety, and the CRSS, aims to help consumers find low-salt, low-sugar products more easily and make informed choices about their health.

Manufacturers and distributors may, using the specific labels of the scheme, label their prepackaged foods as defined under the Food and Drugs (Composition and Labelling) Regulations (Cap. 132W): “low salt,” “no salt,” “low sugar” or “no sugar.” A list of these products is available on the Centre for Food Safety’s website.

As of early August, the scheme covered 247 products in several categories including beverages, snacks, cereal products, dairy/soy products, sauces etc.. Forty of the aforementioned products were labelled both “low/no salt” and “low/no sugar,” accounting for 16 per cent of all products under the scheme. The rest qualify only for one label.

Excluding out-of-stock and seasonal products, the nutritional information for which is currently unavailable, FactWire evaluated 148 such single-labelled products and found at least 12 “low sugar” or “no sugar” products that contain excessive salt or sodium.

Among the 12 “low/no sugar” products whose sodium contents exceed the Centre for Food Safety’s standards for sodium, the Superior First Extract Soy Sauce and Thin Soy Sauce of Koon Chun Sauce Factory (250ml and 500ml bottles) have the highest sodium amounts of 7.34g and 7.24g per 100ml respectively, both exceeding the sodium limit by over 23 times.

The World Health Organisation recommends a maximum sodium intake of two grams per day in adults. In other words, consuming about two tablespoons of the aforementioned Koon Chun Sauce Factory’s sauces per person per day would exceed the WHO’s recommended maximum daily intake levels.

Among products other than sauces, Wong Chi Kei Yea Yea Shrimp Roe Noodles ranks highest in sodium, with 1.2g per 100g, double the sodium limit. The remaining six high-sodium products exceed the limit by margins of between 23 per cent and 90 per cent.

Similarly, at least five products under the scheme were labelled “low salt” or “no salt” but are high in sugar, according to the Centre for Food Safety’s standard defining “high sugar” products as those containing over 15g of sugar in every 100g. Woolworths Free From Gluten Biscuit Double Chocolate has the highest sugar concentration (39g in every 100g), exceeding the sugar limit by almost 1.6 times. The amount of sugar in another snack from the same brand, Canadian Maple Cashew, is more than double the limit, at 31.2g of sugar in every 100g.

Based on the World Health Organisation’s guidelines, the Centre for Food Safety strongly recommends a daily maximum intake of 50g of free sugars for a total energy intake of 2,000kcal. A single pack of Free From Gluten Biscuit Double Chocolate contains 160g of sugar, while a pack of Canadian Maple Cashew contains 200g of sugar.

Despite being labelled “low salt” in Hong Kong, Woolworths Free From Gluten Biscuit Double Chocolate is rated only one star, the second-lowest possible rating, under the Australian government’s Health Star Rating scheme. There are currently no regulations in Hong Kong requiring Woolworths to label it a high-sugar product.

Another Woolworths product, Cracked Pepper Cracker Snapz, is rated 1.5 stars under the Australian system. That same product is labelled “low sugar” in Hong Kong and is not required to label itself high in sodium.

Registered dietitian and former member of the CRSS Sylvia Lam See-way agrees that there is a loophole in the labelling scheme. Soy sauces, for example, though low in sugar by nature, are usually high in salt instead. The “low sugar” label may lead customers into thinking they are healthy and attract them to consume such products regardless of other nutritional information, she said.

Although sauces like soy sauce are not meant to be drunk directly, the use of it in food may still significantly affect one’s sodium intake, added Lam.

The labelling systems in some other countries indicate the amounts of a variety of nutrients found in a product. The Traffic Light Labelling system adopted in the United Kingdom uses green, yellow, or red symbols to indicate whether the product has low, medium or high amounts of fat, saturated fat, sugar and salt respectively. The Australian Health Star Rating system calculates a rating from half a star (least healthy) to five stars (healthiest) in a formula that takes into account the amounts of sodium, sugar, saturated fat, energy, dietary fibre, protein and other nutrients in any given product.

Lam told FactWire that while the CRSS had referred to both the UK and Australian systems when designing the label scheme for Hong Kong, she personally prefers Australia’s rating system. The CRSS, however, gave up the idea due to the complicated calculations involved in creating each rating.

The UK’s system, despite being simpler, is still not entirely practical without legislation, Lam said. “It is difficult to make it compulsory for manufacturers to label their products in this way, let alone require them to pay for it,” she said, adding that overseas manufacturers may lack motivation to sell their products in Hong Kong if repackaging is required.

Lam anticipates that the government will instead focus its efforts on educating the public to read nutrition labels. She stressed the importance for individuals to make the right choice according to their own health, adding that the “low salt” and “low sugar” labels are only for general reference.

Former legislator Helena Wong Pik-wan criticised the use of “low salt” and “low sugar” labels without requiring manufacturers also to add “high salt” and “high sugar” labels. Speaking at the Panel on Health Services in 2018, she voiced doubt that the voluntary labelling scheme would be effective in reducing sodium intake. Undersecretary for Food and Health Chui Tak-yi responded at the time that it would be best if the government could achieve the reduction target through education and voluntary efforts. Legislation was possible but only under the right conditions, he said.

In response to FactWire’s inquiries on the funding and expenditure of CRSS, the committee said it had spent roughly HK$23.72 million from 2017 to 2021 on public education and promotional events. The budget for the 2021-2022 year term is around HK$6.8 million.

Other than the “Salt/Sugar” Label Scheme for Prepackaged Food Products, the CRSS said it has introduced the Less-salt-and-sugar Restaurants Scheme, promoted its work through online restaurant search platforms, and performed public outreach through various means, including online cooking demonstrations, promotional videos, sponsorship of radio and television programmes, animation and children’s songs.

Apart from helping consumers make informed choices, the label scheme aims to encourage the industry to provide a wider variety of low-salt and low-sugar products. However, there were only 20 companies taking part in the scheme as of August 7, producing or importing 247 products in total. Six of these 20 companies are associated with former or present CRSS members, comprising over 70 per cent of the products under the scheme, including 75 from ParknShop, 38 from Hung Fook Tong, 31 from Coca-Cola, 28 from Vitasoy, two from Maxim’s and two from Nestlé.

In the last term of office before March this year, the Hong Kong & Macau Marketing Director of Coca-Cola China Ltd. at the time, Clory Wong, and the Chief Executive Officer and Executive Director of Hung Fook Tong Group Holdings, Ricky Szeto Wing-fu, were appointed unofficial members of the CRSS.

Apart from the products found to contain excessive salt or sugar, all of ParknShop’s products have also been removed from the list. The total number of products participating in the scheme fell 34 per cent, from 247 to 163.

FactWire then submitted an inquiry to the Centre for Food Safety, asking why these products had been removed from the list. The Centre said the government had noted public concerns about high-sugar products labelled “low salt” and high-salt products labelled “low sugar” that qualified to be listed under the scheme. It said it had already contacted affected manufacturers or distributors, who agreed to remove their products from the list.

The Centre for Food Safety added that it would update the scheme’s specifications to provide clearer guidelines to manufacturers and distributors, and that while some manufacturers or distributors had elected to tentatively remove their products from the list, they would consider re-listing once updated scheme details are revealed.

Still, FactWire found that some of the high-salt or high-sugar products sporting the scheme’s labels are still available for purchase, despite having been removed from the list on the website. These include Koon Chun Sauce Factory Superior First Extract Soy Sauce, Wong Chi Kei Yea Yea Noodles, Woolworths Canadian Maple Cashew, and La Selva Cooked Ham Extra Reduced in Salt 25 percent.

In 2013, the World Health Assembly adopted a voluntary target of a 30 per cent reduction in average intake of salt or sodium by 2025. The CRSS was founded two years later by the Food and Health Bureau to work to reduce Hongkongers’ salt and sugar intake.

Fri Sep 17 , 2021
Great vegan food is easy to come by in Philly — but some dishes stand above the rest. For exciting ingredients and convincing meat alternatives that are as affordable as they are delicious, here are the 7 essential vegan dishes to try in Philly, in illustrated form. Gudeg and Oseng […] 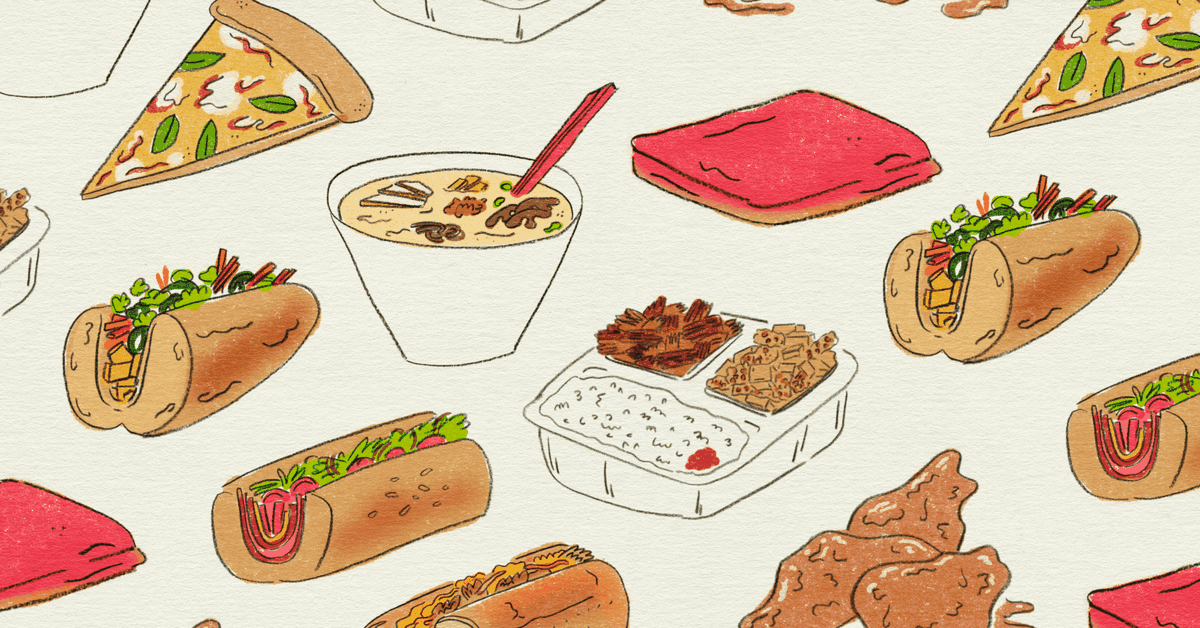