The recipe Cut 4 medium-sized red peppers in half, then into long, 1cm thick strips. In a heavy, shallow pan, heat 5 tbsp of olive oil, add the peppers, season and add rosemary, then fry over moderate heat, stirring, for about 5 minutes. Peel and thinly slice 1 clove of […]

Cut 4 medium-sized red peppers in half, then into long, 1cm thick strips. In a heavy, shallow pan, heat 5 tbsp of olive oil, add the peppers, season and add rosemary, then fry over moderate heat, stirring, for about 5 minutes.

Peel and thinly slice 1 clove of garlic and add to the pan. Halve a large bulb of fennel, slice thinly, then add it to the peppers, rosemary and garlic and continue cooking for a good 10 minutes.

Break 1 egg into a shallow dish and beat lightly with a fork to mix yolk and white. Season. Using a food processor, reduce 100g of white bread to coarse crumbs, then spread on a dinner plate.

Slice a medium-sized aubergine into rounds approximately the thickness of a £1 coin, dip each slice first into the egg then the crumbs. Press firmly.

In a shallow pan – I use one about 28cm in diameter – heat 6 tbsp of olive oil over a medium heat. Lower the crumbed aubergine slices into the oil and fry for about 4 minutes on each side until the aubergine is soft and the crumbs are crisp and golden. Lift out and drain for a second or two on kitchen paper.

Stir 15 or so medium-sized basil leaves into the peppers, then serve with the aubergines. Enough for 2

Keep the heat moderate so that the juices from the peppers and fennel don’t evaporate. Likewise when cooking the aubergine, work at a medium heat where the aubergine can cook inside, before the crumbs brown and crisp.

You can grill the aubergines instead, pressing the lightly oiled slices on to the grill with a palette knife until cooked through, marked with black stripes from the griddle. Or cook them on a barbecue, the sauce made previously indoors.

What you need to make caramel iced coffee

Wed Jun 2 , 2021
What do you need to make caramel iced coffee? Summer is just around the corner, temperatures are rising and cold brew coffee is back on the menu. But what if you want to enjoy a tasty sweet caffeinated treat without leaving the house? It may sound intimidating at first, but you […] 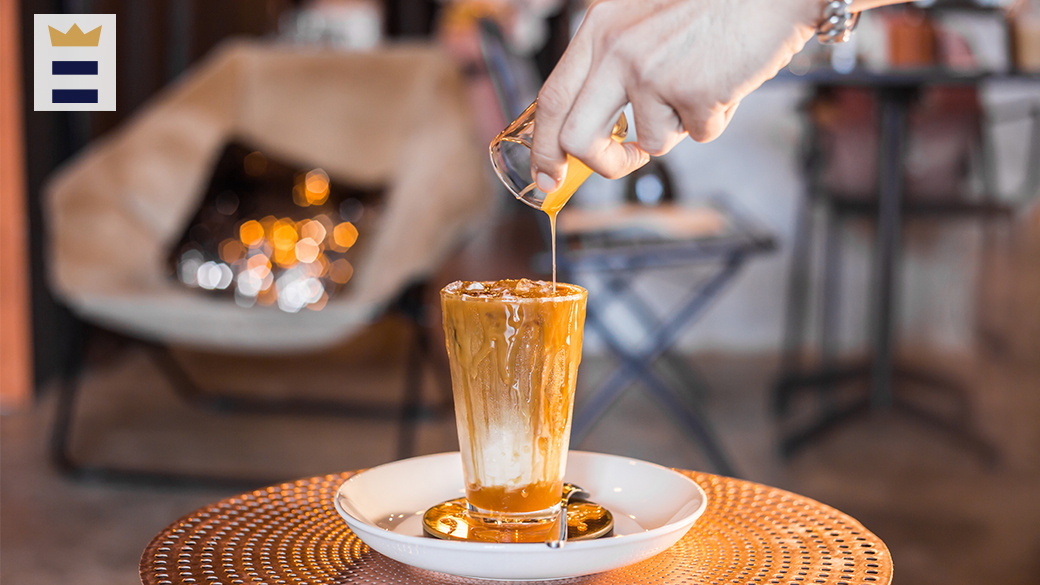